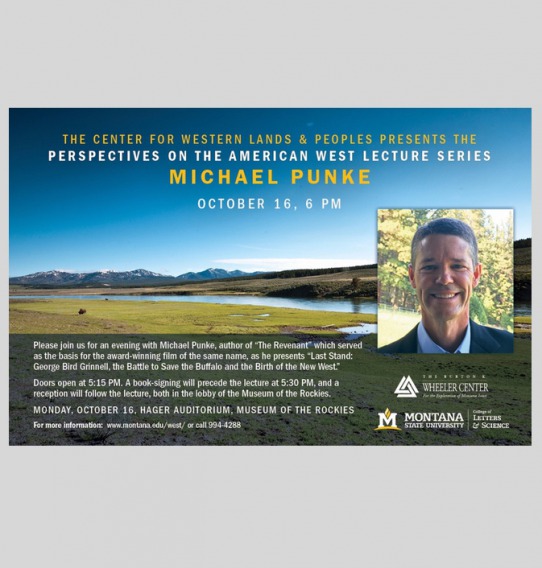 Please join us for an evening with Michael Punke, author of "The Revenant" which served as the basis for the award-winning film of the same name as he presents "Last Stand: George Bird Grinnell, the Battle to Save the Buffalo and the Birth of the New West".

The Burton K. Wheeler Center is proud to co-sponsor the annual Western Lands and Peoples lecture series with the College of Letters and Sciences at Montana State University.
When: Monday, October 16, 2017 at 6:00 PM. The doors open at 5:15 and a reception and book signing will start at 5:30
Where: Museum of the Rockies, Hager Auditorium
More information: http://www.montana.edu/west/speakers/punke.html

Michael Punke is Vice President for Global Public Policy at Amazon Web Services. He has more than 25 years of experience in international trade and regulatory issues.

Punke served from 2010 to 2017 as Deputy U.S. Trade Representative and U.S. Ambassador to the World Trade Organization (WTO) in Geneva. He had lead responsibility for international trade negotiations including the Trans-Atlantic Trade and Investment Partnership, the Trade in Services Agreement, the Environmental Goods Agreement and all negotiations under the auspices of the WTO. He also led the negotiations resulting in the 2013 Trade Facilitation Agreement, the first fully multilateral agreement in the WTO’s twenty-year history, and the 2015 Information Technology Agreement, the first WTO tariff reduction agreement in seventeen years. During his tenure as U.S. ambassador, Punke engaged on a daily basis with counterparts from more than 160 countries, with particular focus on China, India, Brazil, and the European Union and its member states.

From 1998 to 2003, he was a member of the International Trade and Regulatory Practice Group at Mayer, Brown and Platte’s Washington office, including three years as partner.

From 2003 to 2010, Punke lived in Missoula, Montana, where he continues to keep his family home. He worked as a writer, consultant and adjunct professor at the University of Montana. He is the author of the novel, "The Revenant," which served as the basis for the award-winning film of the same name, as well as two works of narrative nonfiction and several screenplays. "The Revenant" has been translated into more than twenty languages and was an international bestseller, including four weeks as a #1 New York Times bestseller.