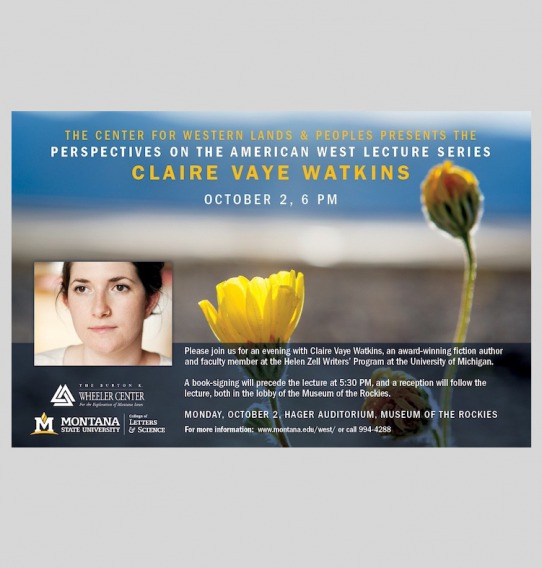 Please join us for An Evening with Claire Vaye Watkins presented by the Center for Western Lands and Peoples' Western Lands and Peoples: Perspectives on the American West Lecture Series. Watkins, an American author and faculty member at the Helen Zell Writers’ Program at the University of Michigan, will read selections from her fiction that reflect the inspiration she draws from her Western roots, and will discuss regionalism and the West in her work.

The Burton K. Wheeler Center is proud to co-sponsor the annual Western Lands and Peoples lecture series with the College of Letters and Sciences at Montana State University. All these events are free and open to the public.

Where: Museum of the Rockies in the Hager Auditorium

Claire Vaye Watkins was born and raised in the Mojave Desert. A graduate of the University of Nevada, Reno, Watkins earned her MFA from The Ohio State University, where she was a Presidential Fellow.

She is the author of Gold Fame Citrus and Battleborn, which won the Story Prize, the Dylan Thomas Prize, New York Public Library’s Young Lions Fiction Award, the Rosenthal Family Foundation Award from the American Academy of Arts and Letters, and a Silver Pen Award from the Nevada Writers Hall of Fame.

Her stories and essays have appeared in Granta, Tin House, Freeman’s, The Paris Review, Story Quarterly, New American Stories, Best of the West, The New Republic, The New York Times and many others.  A Guggenheim Fellow, Watkins was also named one of Granta's "Best Young American Novelists." A recipient of fellowships from the Sewanee and Bread Loaf Writers’ Conferences, she was also one of the National Book Foundation’s “5 Under 35.”

Watkins is on the faculty of the Helen Zell Writers’ Program at the University of Michigan. She is also the co-director, with Derek Palacio, of the Mojave School, a free creative writing workshop for teenagers in rural Nevada.

Watkins' talk will be preceded by a book-signing at 5:30 PM, and followed by a reception, both in the lobby of the Museum of the Rockies.