Rosalyn LaPier
Museum of the Rockies 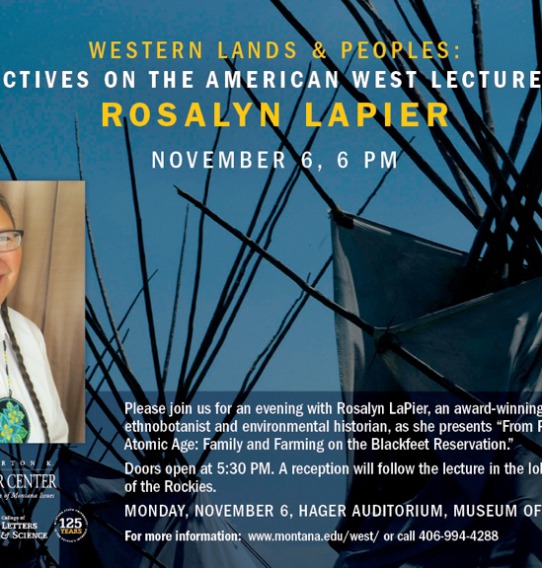 Rosalyn LaPier, associate professor in the Department of Environmental Studies in the College of Humanities and Sciences at the University of Montana, will present "From Prairies to the Atomic Age: Family and Farming on the Blackfeet Reservation" as part of the Center for Western Lands and Peoples’ Perspectives on the American West Lecture Series. This lecture is co-sponsored by the Burton K. Wheeler Center for Public Policy.

When: Doors open at 5:30 PM on November 6th followed by a reception in the lobby after the event

Where: Museum of the Rockies, Hager Auditorium

Cost: Free and open to the public

After the demise of the bison from the Northern Plains, the U.S. government worked hard to turn the Blackfeet into farmers and ranchers. Yet, the winter of 1920 was almost as bleak at the "starvation winter" of 1883. In 1921, the U.S. government tried a new system, the "Five Year Industrial Program," and organized communities under the auspices of the "Piegan Farming and Livestock Association." Aimsback, a traditional spiritual leader, became a farmer and community leader. His story and the story of his family reflect the changing world of the Blackfeet from the prairies to the atomic age in Montana.

Rosalyn LaPier is an award winning Indigenous writer, ethnobotanist and environmental historian. LaPier studies the intersection of traditional ecological knowledge (TEK) learned from elders and the academic study of environmental and religious history. As an activist, her longtime passions include environmental justice on Indigenous lands and the revitalization of Indigenous languages. This year, as a National Steering Committee member, she was one of the organizers of the March for Science held on April 22, the largest day of science advocacy in history, with over one million participants in 600 cities worldwide. Her latest book, Invisible Reality: Storytellers, Storytakers and the Supernatural World of the Blackfeet, was published earlier this year. LaPier, who is an enrolled member of the Blackfeet Tribe of Montana and Métis, holds a bachelor’s degree in physics and a Ph.D. in environmental history.

This talk is free and open to the public. Doors open at 5:30 PM. The talk will be followed by a reception in the lobby of the Museum of the Rockies.